One of the most highly prized eating fish

The most popular species sought by anglers

As popular as snapper for the dinner table

Endemic to New Zealand and a treat to catch

New Zealand has some of the best coastal fishing in the world with a wide range of species to target. A well managed fisheries has ensured there are good fish stocks year round and something for everyone to land from the feisty terakihi to the trophy size snapper.

These are just some of the more well known species you can target while out on the water with Legionaire Charters.

Also known as hapuka or bass, groper is found throughout the coastal waters of New Zealand.

They are deepwater fish that prefer reefs with depths of 80 – 200m. The best baits to catch them with a rod and reel are large fresh fish, live baits and squid.

Known as ‘moeone’ in Maori, they are highly prized for their large size and excellent eating.

Although fishing for them can be seasonal, having a local guide helps locate the best fishing spots year round.

The snapper is probably the most popular and therefore most targeted species of fish along the coasts of the North Island.

On April 2014, the Ministry of Fisheries changed the legal catch size to 30cm and lowered the bag limit to seven per person for the East Coast of the North Island, including the Bay of Plenty. This is to ensure a healthy fish stock for future generations to enjoy.

Snapper average between 1-2kg but can get as big as 15kg though most people target ‘pan size fish’ of around 2-3kg for the best table eating.

As the snapper feed on shellfish and crustaceans, they are often found on the ocean floor but can be caught in any depths with some coming right close to shore to feed in 2m of water or less.

The best baits to use are fresh baits or live baits and the use of berley is usually recommended to draw the fish close in.

The trumpeter is a school fish that once on the bite can be caught in large numbers. They are found in mid to deep reefs and over the foul.

The best baits to use are strips of squid or skipjack tuna using a rig with a heavy sinker attached at the end.

They range in size from small 10 pounders to massive 30 pound trophy fish.

The blue cod is exclusively found in New Zealand and mainly caught in shallow waters around rocky reefs and in the foul. It is prized for its delicious flavor and grows to around 70cm in size.

As they pretty much eat anything, any cut bait like pilchards, mullet or squid can be used.

The terakihi is one of New Zealand’s most popular fish along with snapper and blue cod.

They are schooling fish that are known to be aggressive and very fast making for a great fight for any angler.  Most are of smaller size around 1kg but they can grow to 4kg and are superb table fish.

The best baits to use are shellfish i.e. tuatua which they naturally feed on however soft baits can also work well. 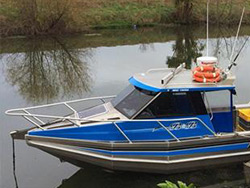 “I fished for many seasons with Bob from the Wairarapa to Hawkes Bay. A very enjoyable day out and plenty of fish to go with it.”